The Lesson I Learned from Poopie Bags

Before I tell you the lesson I learned from poopie bags, let me offer a brief explanation to the non-dog owners out there. Poopie bags are the bags dog owners use to clean up after Sparky when they unceremoniously drop one next to the sidewalk or in the park. Picture a small roll of thin film bags. They often come with a plastic dispenser shaped like a bone or fire hydrant.

Inevitably, I would lose the plastic dispenser. Or more often, my dog Cupcake would mistake it for a chew toy. Without the dispenser I’d walk around with the bags in hand and peel one off the roll when it was time to do my dog-owning duty and clean up his. The problem is that as I was trying to tear one off, Cupcake would go after a new smell and I’d fumble the bags.

Of course, I’d try to catch them before they fell. I’d grasp, juggle, sometimes even kick hacky sack style. I often tried yanking them back yo-yo style by the loose end I was holding. Take it from me, these strategies seldom work. Nine times out of ten I would drop the roll and be left holding the loose end as half the bags unspooled down the sidewalk. Sometimes I’d even drop the leash as a result of my gyrations – and Cupcake was a runner!

I finally learned a trick with the poopie bags. One day, as soon as the bags started to drop, I just let go. I intentionally and purposely let them drop. As I watched them hit the ground, I realized that because I let go, THEY DON’T UNROLL. They just fall.

I’ve been left, after thrashing and grabbing, holding one end of the bags and watching the rest unspool – literally and metaphorically – many more times than I’d like to admit. Our efforts to keep things from unravelling often have unintended consequences and we make things worse.

As simple as this sounds, it is counter-intuitive to let something drop. To realize it’s happening and then just be still for a moment and watch it happen. It takes time to develop the presence and trust to override our natural instinct to react, to stop it, to fix it immediately.

The next time life throws you an unpleasant surprise and you’re tempted to react in order to keep things from unravelling, try letting go. Just for a beat or two. Then you can survey the situation and see what really needs to be done. You might just find you have less of a mess to clean up in the end.

Where do things tend to unroll in your life? Where could you benefit from pausing before you react? I’ve helped many leaders build the trust and connection with self needed to let go. To learn how, click the link below to set up a no obligation exploratory session. The Down Side of Tribalism

In today’s workplaces, employees AND managers often find a tribe of like-minded people to provide a feeling of belonging and validation. People like us. People Looks Like I Picked the Wrong Week to Quit Smoking

Actually, I quit smoking years ago. It’s more like I picked the wrong week to wade into the waters of social media. But here I 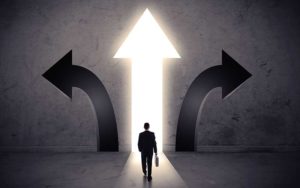 I woke up thinking about the world we now live in and wondered “how did we get here?” Then I picked up my copy of